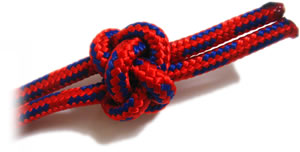 On this page I'll show you a how to tie a lanyard knot the easy way.

I have been watching other videos for several days and couldn't figure it out. As soon as I saw this video I was able to tie the not correctly! Thank you!" Candy

Also called a "friendship" or "diamond" or "knife lanyard" knot, this decorative knot is used in the paracord lanyard and paracord bracelet projects. It's similar to the knot used by the Scouts on their "wood badge woggle".

Tobias came up with a neat method of teaching this knot that involves poking the rope through holes in a piece of paper. It's a bit unconventional, but it works really well and I think it makes learning the knot a lot easier.

Of course, once you've tied the knot a couple of times, you'll be able to tie it without the paper.

Well, enough introduction. Grab yourself a sheet of paper and a length of rope, and settle down for 3 minutes to learn this knot.

How did you go? Did the video make sense? Let me know your opinion using this handy form .

Sometimes when you make the knot you'll want to change the size of the loop that comes out of it. The way to do that is to pull the cord bit by bit through the knot to shrink the loop. It's sort of like when you tighten your shoelace and you start by pulling on the laces near your toes, then pull a bit further up, and a bit further up, each time moving the loops of loose shoelace higher up the shoe until you can pull them through at the top.


Where to buy paracord?

Chances are that if you're into knot-skills you've heard of paracord. It's a super-strong but light-weight cord originally used in military parachutes. In fact, the only reason I learned how to tie the lanyard knot was so that I could make neat stuff (lanyards, bracelets) out of paracord. Anyway, if you're after paracord, then you'll find it at army surplus stores, camping and outdoor stores, or ebay.

Using two ropes next to each other as if they were one rope you can create a neat-looking double lanyard knot. Here's a photo sent in by reader Jodi:

This tutorial is by far the best! Not only can I now tie a diamond knot with a loop on it, I used the paper method to tie a double diamond knot (with a double loop). Thanks so much!" Jodi

Thanks for sharing your photo Jodi!


Things you can make with the lanyard knot

Now that you've watched my lanyard knot tutorial, probably you want to do something useful with it, like braiding lanyards. So, if you're interested, mosy along and have a look at these projects: