An intricately woven paracord lanyard to hold your keys or pocketknife. The "king cobra" design looks cool, and you'll always have 12 feet of super-strong paracord handy.

There are loads of ways of braiding lanyards. My favorite, the one I'll show you how to do on this page, is an elegant design created by Stormdrane . He already has a nice tutorial on his blog, but I thought I'd make my own tutorial targeted at complete beginners. So on this page I'll document how I followed his design, and talk about one or two minor changes I made.

* Stormdrane's original instructions recommended 10 feet, but I'm sure I used at least 11 or 12. I recommend starting with 13 feet, because it's really annoying if you run out of cord right near the end after all that weaving.

550 paracord is about 4mm (somewhere between 1/8" and 1/4") in diameter. It feels a bit like a nylon shoelace. You can buy it at army surplus stores, camping and outdoor stores, or ebay.

I've tried using other, slightly thicker cords, but they produced rather chunky lanyards. I'd stick with the 550 paracord if you can find it.

Got your materials? Great! Time to learn how to make a paracord lanyard with them...

Step 1 - Mark the Center of the Paracord

Fold the paracord in half. Mark the center by tying the rubber band around it like this: 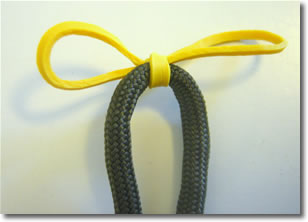 Of course, you could just as well use a piece of string/wire/chewing gum/whatever you like to mark the center instead. But I happened to have a rubber band nearby so that's what I used.

What's a lanyard knot? It's this decorative, round-ish knot: 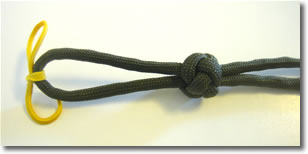 How do you tie it? Just follow my easy step-by-step lanyard knot video . I promise it's not that hard. But if the lanyard knot looks too intimidating, you can always just do a simple overhand knot instead like this:

Whichever knot you choose, you'll probably need to adjust its position a bit once you've tied it. Make it so that the loop on the end is about 2" (5cm) long. Also, you want the center of the paracord (marked by the rubber band) to be right on the end of the loop.

Once you've got the loop sized & positioned correctly, you can get rid of the rubber band.

Poke the two loose ends of paracord through the loop on the metal clip. Pull them through until the distance between the lanyard knot and the metal clip is 5" (about 12.5cm).

What's a cobra stitch and how do you tie one? It's sort of like a "granny knot". You can learn how to tie it on my cobra stitch page . Don't worry, it's easy!

Use the two loose ends to tie 11 cobra stitches down toward the lanyard knot. You will end up with 11 little "bumps" on each side, like this:

Continue all the way back up to the metal clip. (In this pic I'm using a mini carabiner as a clip.)

It's time to snip off the loose ends from the king cobra stitch. Pick one loose end to start with. Cut it short, to leave about 1/4" (5 mm) poking out of the bracelet.

Melt this end with a lighter, and press on the molten end with a wet finger (or the flat edge of a knife). This stops it fraying. Also, by pressing on the end, you squash it into a sort of mushroom shape (like the head of a nail), which stops it working loose. Just be careful not to burn your fingers!

Repeat for the other loose end.

Here's a picture of one of the molten ends to show you what I mean: 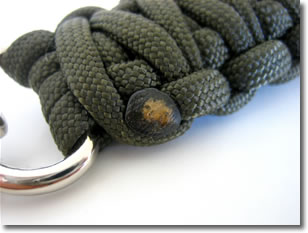 Sometimes people ask if they can buy a paracord lanyard from me. Unfortunately I don't make them to sell (not enough hours in the day!), but plenty of other people sell them on Amazon. If you'd like to, you can click here to browse paracord lanyards on Amazon.com . 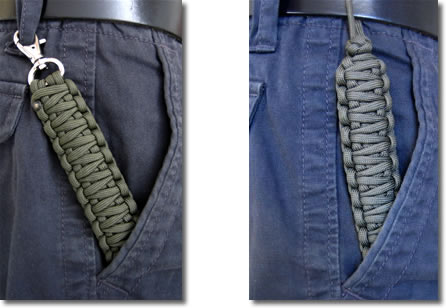 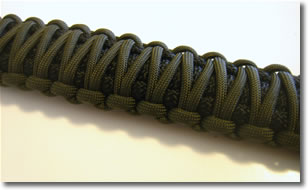 And here's a very nice one made by Andreas Odegard: 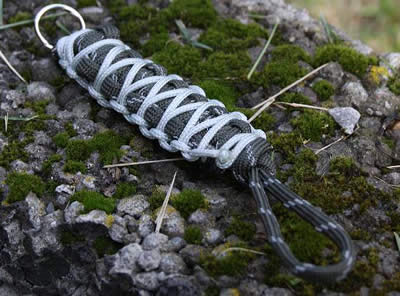 Not sure how to start off the king-cobra stitches with the green cord? It's just the same as how you start the cobra-stitch in step 3 of the paracord bracelet project .

As another variation on the 2-color lanyard, one of our visitors Robert made this neat mini two-color lanyard using a single layer of cobra stitches, similar to the paracord bracelet project. Thanks for sending in the pictures Robert!

Here's a neat idea sent in by visitor Logan:

"I made the same lanyard type but about 1.5 feet long. I attached a multi-tool on the end of it and put a clip on the other end. That way I can attach it to my tactical vest while out in the field, and the lanyard is long enough to use the tool so there's no risk of losing it." ~ Logan 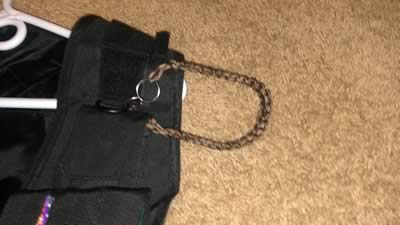 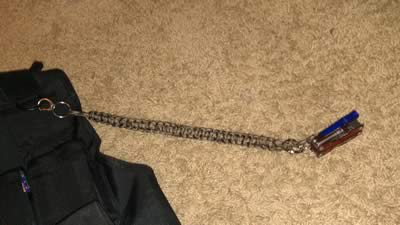 Thanks for sending in your photos Logan!

A neat variation on the lanyard using a full-size carabiner, made by visitor Dakota:

"At the base I lanyard-knotted two different colors together for the center of the cord, continued as normal, and used a full size carabiner with the king cobra but I continued up the side and wound up with this. Also I used 14 feet of cord instead of 13." ~Dakota 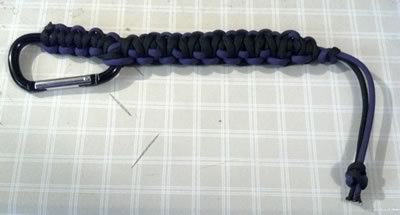 Thanks for sending in your photo Dakota!

Reader Dirk sent in this picture of a lanyard he made that has two loops and three lanyard knots:

Thanks for sending in your photo Dirk!

How did you go making your paracord lanyard? You might also like to have a go at making a paracord bracelet .

If you're making a paracord gift for your Dad for father's day, check out our father's day quotes, messages, and poems to help you write a great card to your Dad too.

If you have any comments or suggestions on my instructions, or just want to say hi, then please contact me with this handy form .