This easy orange marmalade recipe is absolutely scrumptious . The aroma of orange zest in the kitchen while you're preparing it is lovely, and the taste of it on freshly baked, buttered bread is to die for! 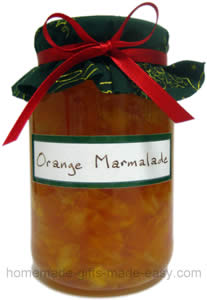 Marmalade recipes don't get any quicker or easier than this. I doubt there's an easier homemade jam recipe out there. It takes only 25 minutes to make , and can be made up in small batches. You can transform those two or three leftover oranges into the most delicious of homemade food gifts.

Just like our grapefruit marmalade recipe , this recipe evolved from my husband's experimentation with "Margaret's Marvellous Microwave Method" . I hope you enjoy it!

No need to use special jam sugar or setting agent. Oranges have plenty of pectin in them so the marmalade will thicken up nicely even with regular sugar.

Like all homemade gifts in a jar, make sure you dress it up nicely! A bit of fabric and ribbon will do the trick :-)