I love reading funny Christmas poems, they always give me a good giggle! Which to be honest, we all need at Christmas when things can be a little on the stressful side at times... 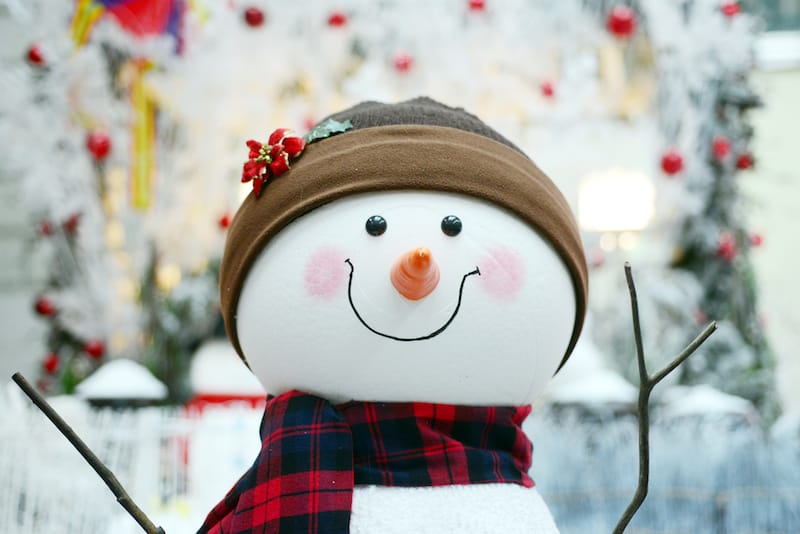 On this page you'll find:

Short and silly Christmas poems
Great for incorporating into Christmas card messages. I think my favourite is the "Snowball" poem... it's so cute!

Longer funny poems for Christmas
Too long to use as Christmas card verses, but fun nonetheless. The "Puppies' Christmas" poem is really sweet.

Humorous Christmas song poems with youtube videos
Ever since I found these and watched the videos, I find myself singing them as I go about the house, much to the amusement of my husband.

I made myself a snowball,
As perfect as could be,
I thought I'd keep it as a pet,
And let it sleep with me.

I made it some pajamas,
And a pillow for its head,
Then last night it ran away,
But first - it wet the bed!

A chubby little snowman
had a carrot nose.
Along came a bunny,
and what do you suppose?

For your Christmas presents,
I thank you one and all.
For the big ones many thanks,
And fewer for the small.

The funniest face
looked out at me
From a silver ball
On the Christmas Tree!

At first I thought
It was Santa's elf,
But I looked again and
It was just myself!

Short & Funny Christmas Poem
Once There Was a Snowman
~ Anon

So he called to the North Wind,
"Come and help me, pray,
For I'm completely frozen,
Standing here all day."
So the North Wind came along,
And blew him in the door,
And now there nothing left,
But a puddle on the floor!

We have been helping with the cake,
And licking out the pan,
And wrapping up our packages,
As neatly as we can.
We have hung our stockings up,
Beside the open grate.
And now there's nothing more to do,
Except
To
Wait.

Twas the night before Christmas and Santa's a wreck...
How to live in a world that's politically correct?
His workers no longer would answer to "Elves",
"Vertically Challenged" they were calling themselves.
And labor conditions at the North Pole,
were alleged by the union, to stifle the soul.

Four reindeer had vanished without much propriety,
released to the wilds, by the Humane Society.
And equal employment had made it quite clear,
that Santa had better not use just reindeer.
So Dancer and Donner, Comet and Cupid,
were replaced with 4 pigs, and you know that looked stupid!

The runners had been removed from his beautiful sleigh,
because the ruts were deemed dangerous by the EPA,
And millions of people were calling the Cops,
when they heard sled noises upon their roof tops.
Second-hand smoke from his pipe, had his workers quite frightened,
and his fur trimmed red suit was called "unenlightened".

To show you the strangeness of today's ebbs and flows,
Rudolf was suing over unauthorized use of his nose.
He went to Geraldo, in front of the Nation,
demanding millions in over-due workers compensation.

So...half of the reindeer were gone, and his wife
who suddenly said she'd had enough of this life,
joined a self help group, packed and left in a whiz,
demanding from now on that her title was Ms.

No candy or sweets...they were bad for the tooth.
Nothing that seemed to embellish upon the truth.
And fairy tales...while not yet forbidden,
were like Ken and Barbie, better off hidden,
for they raised the hackles of those psychological,
who claimed the only good gift was one ecological.

No baseball, no football...someone might get hurt,
besides - playing sports exposed kids to dirt.
Dolls were said to be sexist and should be passe.
and Nintendo would rot your entire brain away.

So Santa just stood there, disheveled and perplexed,
he just couldn't figure out what to do next?
He tried to be merry he tried to be gay,
but you must have to admit he was having a very bad day.
His sack was quite empty, it was flat on the ground,
nothing fully acceptable was anywhere to be found.

Something special was needed, a gift that he might,
give to us all, without angering the left or the right.
A gift that would satisfy - with no indecision,
each group of people in every religion.
Every race, every hue,
everyone, everywhere...even you!
So here is that gift, it's price beyond worth...
"May you and your loved ones enjoy peace on Earth."

It's the day before Christmas
And all through the house
The puppies are squeaking
An old rubber mouse.

The wreath which had merrily
Hung on the door
Is scattered in pieces
All over the floor.

The stockings that hung
In a neat little row
Now boast a hole in
Each one of the toes.

The tree was subjected
To bright-eyed whims,
And now, although splendid,
It's missing some limbs.

I catch them and hold them.
"Be good", I insist.
They lick me, then run off
To see what they've missed.

And now as I watch them
The thought comes to me,
That theirs is the spirit
That Christmas should be.

Should children and puppies
Yet show us the way,
And teach us the joy
That should come with this day?

Could they bring the message
That's written above,
And tell us that, most of all
Christmas is love.

In Baltimore there lived a boy.
He wasn't anybody's joy.
Although his name was Jabez Dawes,
His character was full of flaws.

In school he never led his classes,
He hid old ladies' reading glasses,
His mouth was open when he chewed,
And elbows to the table glued.
He stole the milk of hungry kittens,
And walked through doors marked 'no admittance'.
He said he acted thus because
There wasn't any Santa Claus.

Another trick that tickled Jabez
Was crying 'Boo' at little babies.
He brushed his teeth, they said in town,
Sideways instead of up and down.
Yet people pardoned every sin,
And viewed his antics with a grin,
Till they were told by Jabez Dawes,
'There isn't any Santa Claus!'

Deploring how he did behave,
His parents swiftly sought their grave.
They hurried through the portals pearly,
And Jabez left the funeral early.

Like whooping cough, from child to child,
He sped to spread the rumor wild:
'Sure as my name is Jabez Dawes
There isn't any Santa Claus!'
Slunk like a weasel of a marten
Through nursery and kindergarten,
Whispering low to every tot,
'There isn't any, no there's not!'
The children wept all Christmas eve
And Jabez chortled up his sleeve.
No infant dared hang up his stocking
For fear of Jabez' ribald mocking.

He sprawled on his untidy bed,
Fresh malice dancing in his head,
When presently with scalp-a-tingling,
Jabez heard a distant jingling;
He heard the crunch of sleigh and hoof
Crisply alighting on the roof.
What good to rise and bar the door?
A shower of soot was on the floor.

What was beheld by Jabez Dawes?
The fireplace full of Santa Claus!
Then Jabez fell upon his knees
With cries of 'Don't,' and 'Pretty Please.'
He howled, 'I don't know where you read it,
But anyhow, I never said it!'
'Jabez' replied the angry saint,
'It isn't I, it's you that ain't.
Although there is a Santa Claus,
There isn't any Jabez Dawes!'

Said Jabez then with impudent vim,
'Oh, yes there is, and I am him!
Your magic don't scare me, it doesn't'
And suddenly he found he wasn't!
From grimy feet to grimy locks,
Jabez became a Jack-in-the-box,
An ugly toy with springs unsprung,
Forever sticking out his tongue.

The neighbors heard his mournful squeal;
They searched for him, but not with zeal.
No trace was found of Jabez Dawes,
Which led to thunderous applause,
And people drank a loving cup
And went and hung their stockings up.
All you who sneer at Santa Claus,
Beware the fate of Jabez Dawes,
The saucy boy who mocked the saint.
Donner and Blitzen licked off his paint.

I want a hippopotamus for Christmas
I don't think Santa Claus will mind, do you?
He won't have to use our dirty chimney flue
Just bring him through the front door, that's the easy thing to do

I can see me now on Christmas morning, creeping down the stairs
Oh what joy and what surprise when I open up my eyes
To see a hippo hero standing there

Mom says the hippo would eat me up, but then
Teacher says a hippo is a vegetarian

There's lots of room for him in our two-car garage
I'd feed him there and wash him there and give him his massage
I can see me now on Christmas morning, creeping down the stairs
Oh what joy and what surprise when I open up my eyes
To see a hippo hero standing there

Grandma got run over by a reindeer
Walkin' home from our house Christmas eve
You can say there's no such thing as Santa
But as for me and Grandpa, we believe

It's not Christmas without Grandma
All the family's dressed in black
And we just can't help but wonder
Should we open up her gifts or send them back?

Grandma got run over by a reindeer
Walkin' home from our house Christmas eve
You can say there's no such thing as Santa
But as for me and Grandpa, we believe

Grandma got run over by a reindeer
Walkin' home from our house, Christmas eve
You can say there's no such thing as Santa
But as for me and Grandpa, we believe!

I hope you enjoyed my selection of funny Christmas poems! Here are some more pages with Christmas card wishes and greetings you might like.

Does your family have an Elf on the Shelf? If so, you might be interested in our Free Printable Elf Goodbye Letter.

Looking for activities for your kids? Check out our Christmas Word Searches.

Brighten your home with a gorgeous Christmas poster. Choose from 3 festive designs.